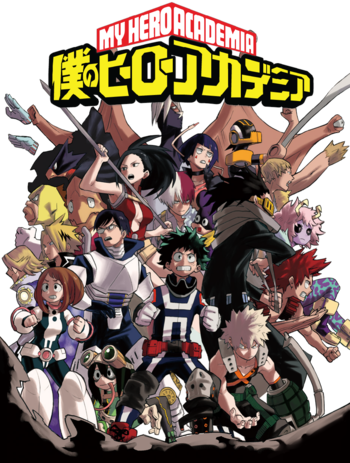 Go Beyond! Plus Ultra!
"You can become a hero."
— All Might
Advertisement:

My Hero Academia (僕のヒーローアカデミア Boku no Hero Academia) is a manga written and illustrated by Kohei Horikoshi, which began serialization in Weekly Shōnen Jump on July 7, 2014. It was reworked from a one-off story for Akamaru Jump before being expanded into its own series.

Over the past century, the human race has begun manifesting superhuman abilities known as "Quirks". With 80% of humankind possessing some kind of Quirk, crime has been amplified to superhuman levels; but in turn, those who seek to use their Quirk to save lives and gain prestige can train to become an officially-licensed hero. Izuku Midoriya is a young, idealistic boy who dreamed of becoming just like his favorite hero, All Might, despite being among the unlucky one-in-five without a Quirk. He continued to hold onto his dream of becoming a hero through wits, filling countless notebooks with notes on powerful Quirks and crime-fighting. Yet a chance encounter with All Might himself changed everything when the veteran chose Midoriya to inherit his own Quirk, "One For All". Now Midoriya has a real chance to become the kind of hero he always dreamed of and attend U.A., the most prestigious Superhero School in the country. He trains his hardest despite all the obstacles in society and follow in All Might's footsteps as the Symbol of Peace, inspiring many with the belief that everyone can be a hero if they help those in need and if they have the will to do so.

It has been picked up by Viz Media and the English version of Shonen Jump. The manga serialization began its run in the English version by showcasing the first chapter before going into the middle of the U.A. Sports Festival Arc, which was where the series was at that point, with a recap explaining things up to get readers caught up. Volume collections were eventually released, covering the stories that were skipped over.

An anime adaptation by Studio BONES began airing in April 2016 as part of the Spring 2016 Anime season. Funimation gained the license to the series and produces the English dub. Interestingly, the episodes of Funimation's SimulDub were being made a week after the initial episodes aired. Season 2 premiered in April 2017 as part of the Spring 2017 Anime season. This time around, the first fourteen episodes of Funimation's SimulDub premiered simultaneously with the Japanese release. A third season was soon announced after Season 2 ended, and began in April 2018, with Funimation once again airing their dub on the same day. Season 4 began airing in October 2019. When that ended in April 2020, Season 5 was likewise announced, which eventually aired in April 2021.

Toonami licensed the anime adaptation, which began airing on May 5, 2018.

This page has unmarked spoilers for Seasons 1 and 2 of the anime or up to Chapter 70 of the manga.

My Hero Academia provides examples of: