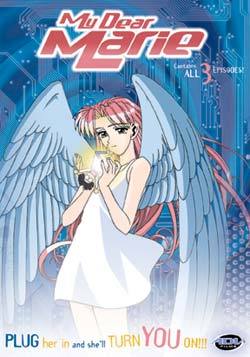 My Dear Marie is a 1994 manga made into a three-episode OVA in 1996. Only the OVA has been brought overseas, originally under the name Metal Angel Marie, and is the subject of this article. It was created by Sakura Takeuchi and Sho Aikawa.

The first two episodes revolve around Hiroshi, a friendly neighborhood mad scientist. Unlucky at love, he creates a robot with the appearance and name of his crush, Mari. The robot, Marie, accidentally meets the original Mari, and Hiroshi starts telling people that he and Marie are siblings as a cover story. Soon, a tough girl, Hibiki, enters the picture, and threatens to reveal the truth about Marie, unless Hiroshi becomes her boyfriend.

The third episode revolves around Marie and consists of three dream sequences. They contain much bizarre imagery and navel gazing, as well as some other stuff.