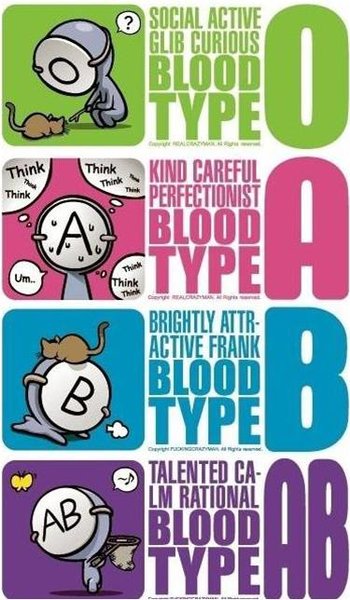 I'm such an optimist that my doctor told me my blood type was B Positive.
— Mark Rosewater, Magic: The Gathering R&D
Advertisement:

In much of Asia, especially well known in Japan, blood types are seen to determine personalities. It's common in any series where it's All There in the Manual to list the blood type of all the characters. Incidentally, the practice started as a type of pseudo-scientific propaganda: One group of people rebelled against invasion while another simply accepted the invaders. Since the two groups had different blood-types, the army doctors simply claimed that it was their blood-types making them rebel, rather than accept that just maybe, most people don't like having their country invaded. Interestingly, there used to be machines in public places which would tell your blood type, but they were removed after the health issue associated with shared needles became more apparent.

It's said that the predominant blood type in Japan is A, with about 40% of the population, while Americans tend toward O, about 37%. It's also estimated that more than 99% of the Japanese are Rh+, so the familiar +/- seen after American blood types can usually be dispensed with.

This belief was also the basis for a Japanese eugenics program during WW2, and has since been disproven.

While the system above is almost exclusively an east Asian trope, Western media does occasionally use blood types as metaphors for a character's personality, especially assigning Type O- (Universal Donor) to generous, selfless characters.

See also AB Negative and The Power of Blood.