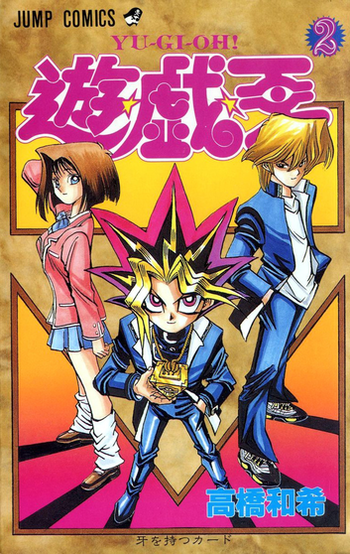 Cover of the second Japanese volume.
"In a Shadow Game, your heart's weakness is what ultimately causes you to lose!"
— Dark Yugi

The Yu-Gi-Oh! manga by Kazuki Takahashi tells the story of Yugi Mutou, who is pulled into the world of high-stakes gaming after completing the Millennium Puzzle and awakening the Pharaoh within, gaining a darker personality known as Dark Yugi. The title of this manga means "Game King" in Japanese and thus it contains a number of games, all of which happen to have at least one thing that's being wagered. These games are usually played as Shadow Games, games in which the loser receives a dark punishment called a Penalty Game, which may or may not result in death. There is also a strong theme of friendship and unity between the main character and his circle of friends, and also the meeting of hearts through the medium of games.

The first seven volumes have the most variety in games; from then on, the most common game that appeared was Duel Monsters/Magic & Wizards, the Yu-Gi-Oh! card game, in response to favorable reader reception.

The early episodic stories found in much of the early volumes are collectively referred to as the High School chapters. In Viz Media's edition of the manga, the stories up to Monster World are simply called Yu-Gi-Oh!, Duelist Kingdom to Battle City are called Yu-Gi-Oh! Duelist, and the final story arc is called Yu-Gi-Oh! Millennium World.

The manga was the basis for the Toei anime and NAS Duel Monsters anime. Yu-Gi-Oh! The Dark Side of Dimensions takes place six months after the manga (or a year after the anime in the West), and is the first Yu-Gi-Oh! anime adaptation with direct involvement from Kazuki Takahashi. There's also a two-part continuation of the manga called TRANSCEND GAME written by Takahashi, which serves as a prequel to the movie.

Bakura laughing collection (brought to you by the Japanese voice of Ash Ketchum).

Bakura laughing collection (brought to you by the Japanese voice of Ash Ketchum).