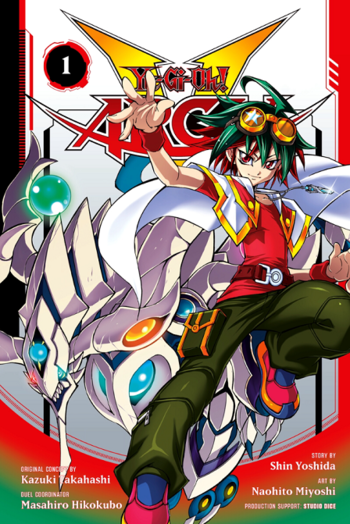 Yuya Sakaki is the mysterious Entertainment Duelist known as the "Phantom", pursued by Reiji Akaba and the Leo Corporation after he hacked into their Solid Vision System. Yuya himself is in search of the card "Genesis Omega Dragon", a card that will supposedly determine the fate of the world. Having to share a body with Yuto, along the way he encounters Yuzu and, after not entirely paying attention to the piece of paper she had him "autograph", he now finds himself with a hothead of a manager along for the ride as well. With Yuri and Yugo also sharing Yuya's body, things only get weirder from here on out.

Published monthly in Shueisha's V-Jump in Japan and Shonen Jump in US since August 20th of 2015.

The manga is written by Shin Yoshida (story) and Masahiro Hikokubo (duels), drawn by Naohito Moyashi and supervised by Kazuki Takahashi. It ran from August 2015 to April 2019, totaling 45 chapters compiled into seven volumes.

Character tropes can be found here.