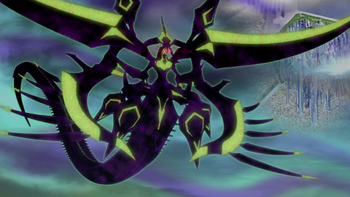 Duel Monster? No, I am the devil! And you will kneel before me!
Advertisement:

As arguably the darkest Yu-Gi-Oh! series thus far, it's no surprise that ARC-V has more than its share of terrifying scenes. This is, after all, the series that serves as a Deconstructor Fleet of the franchise as a whole.