Sins of Our Fathers 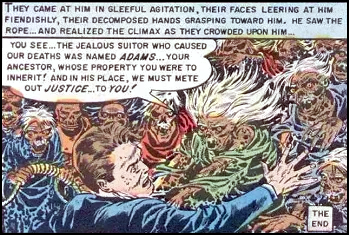 The act of exacting revenge upon the descendants of the one who originally did the wrong.

Why someone would target the descendants rather than the one who originally did the wrong tends to vary: the original offender may not be alive for the victim to go after and make suffer, their descendant benefitted (or still benefits) from his ancestors' crimes; the money grandfather stole allowed the father to go to medical school, which allowed the son to grow up in comfortable circumstances; therefore, son deserves to be punished for grandfather's theft, or they are physically incapable of going after the prime target due to other circumstances that prevent their revenge in their eyes (at least not without extreme consequences), so they choose to go with a more possible approach. This is especially true of villains who are immortal or undead, or many a Sealed Evil in a Can, whose hatreds can take years if not decades or centuries to fester and grow. More often than not, this form of revenge is pursued by villains rather than heroes, since targeting someone other than the person who actually committed the wrong, and who may not have anything to do with it aside from being descended from the person who did is a good way to wind up on the wrong side of the Rule of Empathy.

Frequently a Bewildering Punishment for the victim, though this trope is more likely than most to have the villain explain the offense to the victim. The villain may justify it on the grounds that the children profited by the original crime, particularly when they own something that belonged to the villain. Repeated instances of this occurring between two families in a tit-for-tat fashion may lead to a full-blown blood feud between them.

May overlap with Affair? Blame the Bastard or with particularly hostile examples of Unbalanced by Rival's Kid. Compare and contrast with Revenge by Proxy, where the target is the child or other associates in preference to the character who actually wronged them, even though that character is available, in order to make that character suffer more. The trope name comes from the ancient saying: "The sins of the fathers shall be visited upon their children." If this continues on for generations, it can overlap with Familial Foe. Also see Doesn't Trust Those Guys.

Alternative Title(s): Sins Of The Father