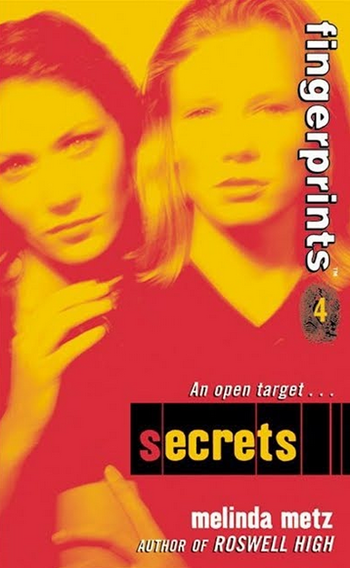 Fingerprints is a series of young adult novels by Melinda Metz, author of Roswell High (the series Roswell was based on), and is written in a similar style.
Advertisement:

Rae Voight is an Ordinary High-School Student. However, on her first day of high school, her head suddenly becomes filled with thoughts that aren't hers. After suffering a massive freak-out, she is sent to a mental institution.

A year later, Rae is out, having tricked her doctors into thinking she is longer hearing the not-her thoughts. However, on her first day back to school, someone sets a bomb to try and kill her. In the process of investigating why, she learns she isn't crazy after all: she has Psychic Powers. Whenever she touches someone's fingerprint, she hears what they were thinking when they left it.

...What kind of lame power is that, anyway?

Using her powers as best she can, Rae tries to discover who is trying to kill her. She gets help from a few of her friends. There's Anthony, a Troubled, but Cute potential Love Interest who was framed for the bombing; Jesse, his also-troubled honorary little brother; and Yana, a Cool Big Sis who was doing volunteer work at the mental hospital where Rae stayed. Together, they try to protect Rae and uncover the mystery surrounding a mysterious Group attended by Rae's dead mother, and meet a few other people with psychic powers along the way. In the end, Rae has to face down not only a Deadly Doctor, but unexpected betrayal from a source very close to her.

There are seven books in the series: Gifted Touch, Haunted, Trust Me, Secrets, Betrayed, Revelations, and Payback. In July 2010, an omnibus of the first three books is being released under the title Echoes. Gifted Touch has been renamed Echoes and Trust Me has been renamed Trust (probably so the entire series will have one-word titles).