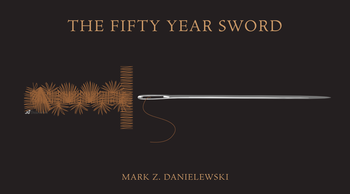 One sword will kill a season. One will kill a country. One I'm making now will even kill an idea.
Advertisement:

Five speakers (it's unclear who they are: they might be the five orphan children, or someone else entirely) tell the story of an unusual Halloween night in East Texas, where one Belinda Kite is having her 50th birthday. Chintana, a local seamstress, finds herself in attendance despite the fact that Belinda cheated with Chintana's husband, leading to Chintana's divorce. During the night, Chintana comes across five orphans and their social worker, who in turn says that she's invited a storyteller to tell them a ghost story. The man turns out to be a huge shadowy figure bearing a sword with no blade—according to him, a Fifty-Year Sword.

This being a Mark Z. Danielewski book, it goes downhill from there.