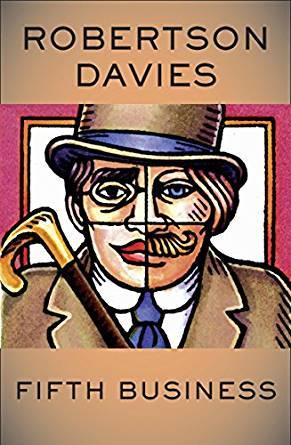 Fifth Business (1970) is the first novel of the Deptford Trilogy, a series of books written by the noted Canadian novelist Robertson Davies which tread a line between normalcy and magic realism, which trace the chaotic consequences of a single act of cruelty on the lives of three young men from the small Canadian village of Deptford.

The novel takes the form of a letter from retired schoolteacher Dunstan Ramsey to his unnamed headmaster; annoyed at being portrayed during his own retirement party as a doddering old geezer who'd never had any sort of life outside of the classroom, Dunstan begins to relate his life's story to illustrate that the younger colleagues who dismiss him don't know the first thing about what he's really like. So he begins with the winter day in his childhood when he and his sometime-friend Percy Boyd Staunton were quarreling more fiercely than usual: Percy throws a snowball with a rock in it, Dunstan ducks, and the snowball strikes a passing woman, Mary Dempster, the heavily pregnant young wife of the local parson. The resulting injury brings her to premature labour, causes her severe mental trauma, and forever alters the lives of three boys associated with the event: Dunstan, Percy, and Mary's premature son Paul Dempster.

Despite its rather dense prose and frequent highbrow allusions, Fifth Business ultimately explores a fairly simple idea. Simply put: not everyone is the hero of their own story. While destiny might single some people out for momentous deeds and accomplishments, the world is also full of people who are fated to play unacknowledged supporting roles in the lives of the great and powerful, and those people's lives are just as worthwhile and fulfilling as anyone else's. If all the world's a stage, some people will always have to play the part of "fifth business"—that is, parts that don't fit cozily into the four basic roles of "Hero", "Villain", "Lover", and "Confidant", but are nonetheless crucial to resolving the plot.

Over the course of his long life, Ramsey gradually comes to realize that he's one such person; although he has no great destiny of his own, he spends his life on the sidelines of other people's great world-altering trials. By turns, he becomes a supporting player in the lives of a revered corporate CEO, a godly saint, and a world-class Stage Magician. Each of those three figures walks a different path, but they're all the embodiment of a different form of power: worldly wealth, the grandeur of the divine, and the subtle and mysterious art of mysticism.

The novel derives a lot of its popularity from its resonance with national anxieties in Davies' native Canada. While its narrative is open to interpretation, it's often viewed as an allegory for the Canadian people's struggle with their reputation as the "supporting players" of modern history.

Tropes featured in this novel: