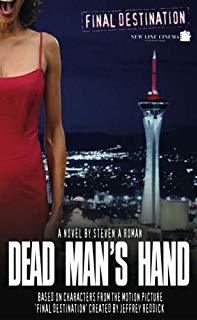 A number of novels have been released as part of the Final Destination franchise.

open/close all folders
Series-Wide
Dead Reckoning
When the nightclub that she's just been performing in collapses, killing everyone inside, Jess Golden is more than a little freaked out-she'd seen the whole thing happen in a vision only moments before. Already under suspicion from the police, Jess is implicated even further when the other survivors start dying mysteriously. As the death toll mounts a twisted plan is hatched so that Jess and her friends might live, a plan that may ultimately place them in further danger...

Enter the exhilarating world of the Los Angeles underground rock scene-Death's name isn't down but he's definitely coming in.

Destination Zero
After an investigative journalist narrowly cheats death in a terrorist attack, she sees a great angle for a story by telling the survivors' tales in her magazine. When the survivors start turning up dead, though, she begins to suspect foul play and finds herself dragged into a world of spiritualism and conspiracies that ultimately leads back to Victorian England and Jack the Ripper.

If you thought you knew suspense and intrigue, then you don't know Jack!

Advertisement:
End of the Line
A group of international students are expecting to live the wild life on a cultural exchange trip to New York, but soon find themselves the only survivors of a horrific subway crash. A young doctor treating the victims tells the students that they were meant to have died in the wreck but they just dismiss it as an idle fantasy. When the group start dying in bizarre and grotesque ways, it slowly becomes apparent that darker forces are at play.

Nobody rides for free and these kids are going to pay with their lives!

No one cheats Death.

Dead Man's Hand
When Annie Goodwin travels to the desert oasis of Las Vegas, she hopes to turn her life around for the better in the casinos. Life's dealt her a rotten hand and her current luck seems to be no different. But when Annie has a premonition of a terrible accident in which she and her husband Tom will die, she takes steps to stop it from happening. Annie, Tom and three other people survive the ordeal and cheat Death. But in a town where the odds are always in the house's favour, can Annie hope to beat the Reaper in this game when she's drawn the Dead Man's Hand?

In the glitz and glamour of Las Vegas, the Grim Reaper plays host... and his routine will slay them all!

Strike a pose. It could be your last...

Working on the fiendishly clever premise that you cannot cheat Death and he will eventually catch up with you no matter what you do, the Final Destination series continues with this nerve-shredding trip into the limelight. Looks Could Kill sweeps you into the ultra-glamorous world or supermodels and fashion photographers. When an upcoming starlet is horribly disfigured trying to save her friends, she is given an unexpected second chance. All she has to do is help Death do away with her friends.

Opportunity knocks for budding young models... but Death just lets himself in.

Death of the Senses
When Jack Curtis has a horrific vision one snowy night, his actions save the life of young policewoman Amy Tom from a brutal psychopath and more people besides. However, the man was supposed to have embarked on a deranged killing spree and now Death is several bodies short. As Death begins to balance his books, Jack and Amy must race to warn all of the intended victims before Death collects his due.