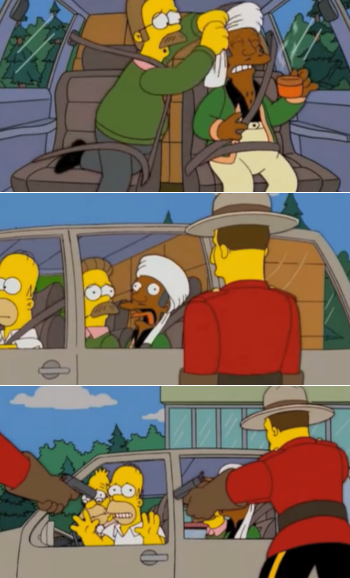 Wait! I Can Explain!
"They thought you guys were terrorizers!"
— George W. Bush, Harold & Kumar Escape from Guantanamo Bay
Advertisement:

A character is mistaken for a terrorist while acting suspiciously, usually in an airport or on a plane. Most of the time it's a misunderstanding. Something or other will be Mistaken for Evidence (for example, the suspect will say something like "This party is gonna be the bomb!").

This trope has existed for decades as the examples below will show, but it took off in popularity post-9/11 on American television in particular, with a more specific plot outline: A One-Shot Character is introduced who is Middle Eastern and/or Muslim—or just assumed to be, perhaps overlapping with Interchangeable Asian Cultures and All Muslims Are Arab. The majority of the cast welcomes this new character with open arms, except for one. He's convinced that this new character is a terrorist, and will do whatever it takes to show the rest of the cast that his suspicions are correct. In doing so he invades the new character's privacy, and eventually learns An Aesop about being considerate of other cultures.

Unfortunately, this is Truth in Television (Real Life examples might double the page length or more). A number of people on airline flights have been discriminated against, including being forced off the plane, because the other passengers or pilots panicked and thought they were terrorists just based on their appearance or misunderstood actions (and there are reports of some who invoke this trope to test the waters or make it harder to find the ones with bombs). Hindus and especially Sikhs have to deal with this too.

This trope can be viewed as an updated version of Mistaken for Spies, reflecting how the "enemy" changed between the Cold War and The War on Terror.