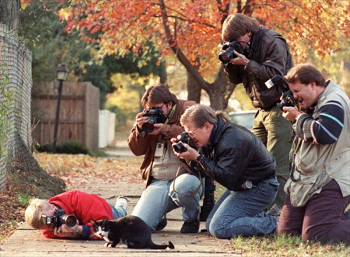 I Can Has Cheezburger?

contributors on a field day.
"You cannot hope to bribe or twist,
Thank God, the British journalist.
But seeing what the man will do,
Unbribed, there's no occasion to."
— Humbert Wolfe

This is a staple of any work of fiction dealing with celebrities - especially those aiming to show Celebrity Is Overrated. The characters will inevitably have to deal with media-folk who are looking for a story to sell at some point, no matter how it affects the lives of the story's subjects, or what laws the paparazzi break in the process of getting the story. This can be considered the Jerkass flipside or Evil Counterpart to the Intrepid Reporter. Particularly bad ones fall under Immoral Journalist.

The paparazzi are Acceptable Targets and may well be victims of a Take That!. Typically they are working for a Strawman News Media outlet.

"Papped" has become a verb for being photographed by these people.

Compare Tabloid Melodrama, which often overlaps, and Groupie Brigade when the invasion comes from fans. Also compare Media Scrum. For some reason, most people who do this wear a Press Hat.