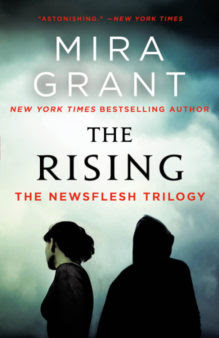 In the summer of 2014, three men tried to help the world, and nearly ended it instead. In Colorado, Dr. Daniel Wells worked on a genetically engineered virus designed to cure cancer, finally achieving a breakthrough with teenager Amanda Amberlee. In Virginia, Dr. Alexander Kellis worked on a similar program to wipe out the common cold. And in Pennsylvania, Brandon Majors (inspired by a sensationalized news article) led a group of college students to break into Dr. Kellis's lab, setting free the experimental and incompletely tested virus.

Soon, the two viruses met and combined to form Kellis-Amberlee, which turned out to be the Virus: it caused the dead to get back up as zombies and eat people, which of course generated more zombies. The initial series of outbreaks was dubbed The Rising.

In an attempt to prevent mass panic, the government decided to lie to the public; newscasters were given scripts indicating that it was either a zombie walk, or a variation of something else (like H1N1 or rabies) making people act aggressively and violently. However, one brave doctor from the CDC leaked the real story, even as bloggers and geeks had already guessed the truth and started spreading the word.

Once the worst was over (for some values of "worst"), humanity researched the situation and quickly learned just how screwed they were: every mammal on the planet was infected with Kellis-Amberlee; any mammal large enough (about 40 pounds) would reanimate as a zombie upon death, or on fluid contact with a 'live' sample of the virus (through zombie body fluids, from another mammal's blood, directly, etc). Some mammals would directly convert into zombies without dying. There was no cure.

In the twenty years since the Rising, life has changed drastically to address the continuous threat of new outbreaks. A significant portion of the American public has retreated behind walls...the density and solidity of which varies by the wealthiness of the citizen. Everyone who has to go outside has to know how to shoot. Strict hygiene protocols must be obeyed. Bloggers are now considered valid journalists because they immediately shared the truth and spread the word during the Rising, while traditional media was still either dancing to the government's tune or just failing to take the disaster seriously.

In 2039, Senator Peter Ryman, seeking the Republican nomination for president, chose a team of bloggers to join him on the campaign trail: After The End Times, headed by Georgia and Shaun Mason and Buffy Meissonier, from the first generation to come of age since the Rising. In addition to learning about Ryman, they discovered some disturbing truths that led them to dig deeper, finding more than they — or anyone — ever bargained for.Some months after the election of President Ryman, the After the End Times crew were still working away, at their Oakland headquarters. A person sent to them joined their team as their new blogger, and they ended up digging into a deeper mystery as Shaun's sanity began to fray.In 2014, Drs. Kellis and Wells pursued their good work trying to cure the common cold and cancer, respectively. Stalnaker the journalist, was going for a sensational angle to present Kellis's work. The method he chose riled up a group of would-be activists who broke into Kellis's lab and released his cold cure. In California, as the Rising began, the Masons heard the rumors and took them to heart as true; and two babies were orphaned during the disastrous period before the Rising was under control.Shaun's already frayed sanity has worsened to hanging by a thread. Mahir, after researching much of what they learned earlier, came to American shores to see their story through to the end. Because they will find and tell the truth, even if it kills them!You can't stop the fans. In 2014, even though scary rumors fly of a real-life, no-foolin' Zombie Apocalypse, the San Diego Comic Con still was scheduled. On preview night, a handful of unlucky fans and a celebrity discovered the hard way just how true those rumors turned out to be.The Rising happened all over the planet. Mahir went to Australia to see how the people of that continent dealt with zombie marsupials amid the other dangers of Australia.Alaric researched an outbreak at a Washington State elementary school. First grade teacher Elaine Oldenburg was the only adult to realize that two terrible things had happened: an outbreak had occurred, and the school's emergency response system had failed somehow. This knowledge led her to a terrible choice between obeying the rules when things had already gone wrong, or try to get her young charges to safety.Dr. Shannon Abbey finds a very strange intruder hiding out in the woods looking for her. Who is she, and who sent her there? Direct sequel to The Day The Dead Came To Show And Tell.A stand-alone novel detailing what was happening on the Democratic presidential candidate's campaign simultaneous to the events of the Republican candidate chronicled by After the End Times in Feed.

In addition, the short story Everglades was published in the anthology Living Dead 2 in 2010. The chronological order of events is Countdown, San Diego 2014: The Last Stand of the California Browncoats, then Everglades, ATPLH, then TDTDCTSAT, then Feed and Feedback, Deadline and Blackout, followed by HGTLHBTS, then PDNTTO, and CTYL. Ms. Grant won the 2010 John W. Campbell award for best new writer for this series.

Blackout and San Diego 2014 were two of McGuire's record five Hugo nominations in 2013.

As usual for stories set in and after a Zombie Apocalypse, expect a lot of Death Tropes to be mentioned. THIS IS YOUR SPOILER WARNING — read no further if you don't want spoilers.