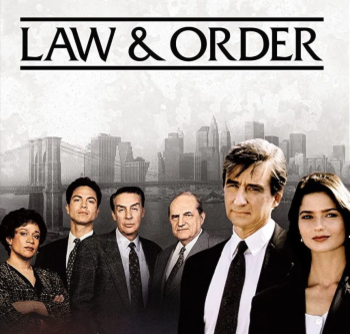 "In the criminal justice system, the people are represented by two separate, yet equally important, groups: the police, who investigate crime; and the district attorneys, who prosecute the offenders. These are their stories."
—Opening narration
Advertisement:

Law & Order is a long-running Dramatic Hour Long crime/courtroom drama created by Dick Wolf, which initially ran on NBC from 1990 to 2010 (20 seasons, 456 episodes).

The show's basic concept is a Mix and Match, with each episode's first half, "Law", showing the detectives of the NYPD's 27th Precinct trying to solve a crime (Police Procedural), and the second half, "Order", depicting the Manhattan District Attorney's office trying to prosecute the same case (Law Procedural).

Law & Order began as an optimistic and realistic portrayal of the criminal justice system. It became extremely popular because it was often Ripped from the Headlines, as NBC promotional ads put it, which meant that it was tentatively based on controversial cases and news stories that were extensively covered as the show progressed. This allowed viewers to remain invested in the show's plot before even viewing the episode. In addition, the inclusion of a more diverse cast of characters allowed the show to appeal to wider demographics and secure its prestigious Long Runner status.

Very little is known about the characters' personal lives, with all the emphasis put on the formula of the story, which was part of the reason for the constant character changes; actors often complained that it was extremely repetitive. Every single character on the show, for this reason, was replaced at least once, and the show finished with a completely different cast from its start. Despite this, the focus on the formula makes the show very rerun friendly on various cable outlets. In addition, the show's characters were well-written enough to justify sustaining relatively superficial information about them; Jerry Orbach's wise-cracking character, Detective Lennie Briscoe, was often considered to be a representation of the quintessential New York City cop.

In the show's 20 seasons, twenty-seven different actors have starred in the leading six roles

The show has incited much Pop-Cultural Osmosis since its inception, as it is very well embedded into the public consciousness for its dramatic portrayal of homicide cases based on real life cases or controversies. This has also led to some problems, with public figures chastising the show's biases or harmful coverage of certain news stories. The show, nevertheless, has spawned a number of spinoffs, all of which can be found here.

When the show was canceled after its 20th season and subsequent attempts to revive it had failed, Dick Wolf optimistically lamented that the show "has moved on to the history books". In late 2021, however, it was announced that NBC would be bringing back the show for its 21st season after a decade-long hiatus. Waterston and Anthony Anderson are confirmed to be reprising their respective roles as DA McCoy and Detective Bernard, respectively, with Jeffrey Donovan joining the cast as a new NYPD Detective, Camryn Manheim as the lieutenant, and Hugh Dancy and Odelya Halevi as the ADAs. Season 21 premiered on February 24, 2022.

It has a character sheet and a recap page. Tropers are encouraged to contribute.

Law & Order is the Trope Namer for:

In the TV Tropes system, the users are represented by two separate, yet equally important, groups: the users who edit the tropes, and the administrators who moderate the pages. These are their examples. *CHUNG CHUNG*

After discovering the victim faked the aggression, Robinette confronts a congressman who used the case to address racial inequality in the justice system.

After discovering the victim faked the aggression, Robinette confronts a congressman who used the case to address racial inequality in the justice system.