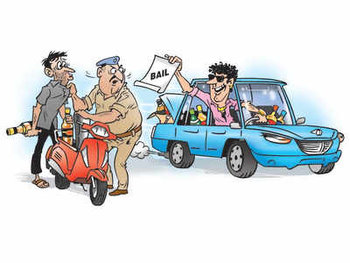 The quickest and best way to get out of any sticky legal trouble is to post bail. Once bail is decided and paid, then you don't need have any more worries about the police, the judge, the jury, or anything else. In extreme cases, you go right out and do the same thing again, only to get caught and post another bail, walking away.

This is when fiction treats bail as a fine, not as a guarantee of a later appearance before the police or the legal system. In real life, most courts take a very dim view of people abusing bail, or failing to appear later — usually it leads to them being detained until trial is concluded, and bail-jumping is itself a crime. That is, if the country even has bail (hint: most don't). Furthermore, those judged to be flight risks or dangers to the public will be denied bail. The decision to grant bail or not in general depends on a wide variety of factors that are weighed together; someone with a long history of serious offenses who is facing charges that could put them away for a long time, who has a mountain of evidence against them, has a proven history of threatening or harassing witnesses, and either has the money to post bail or has associates who do will, as a rule, never be granted bail, not even an exorbitant amount due to the chance that they actually could come up with the money. Most releases also have additional conditions; no-contact orders are common, primarily in domestic violence or assault and battery cases, and substance restrictions, curfews, and travel restrictions or location bans are also frequent.

This could be generously seen as an example of Conservation of Detail: somewhere between episodes, the character goes to court and gets a small fine or some other inconsequential outcome, but this isn't interesting enough to bother showing. But usually it's a bad case of Hollywood Law.