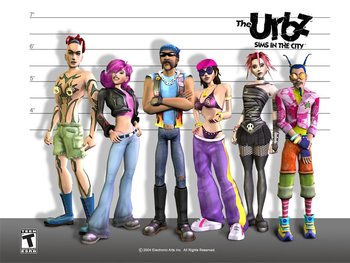 The Urbz: Sims in the City (or simply known as The Urbz) is a Spin-Off title to the immensely popular people Simulation Game, The Sims.

Set after the events of The Sims: Bustin' Out, the player controls an "Urb" (this game's version of a Sim) who had just moved out from their parent's home to Urbzville. Starting out as a nobody, our main character must explore the 9 different districts spread across the city, befriend its locals, and earn reputation points to climb up the social ladder. In addition to the usual gameplay of fulfilling the Urb's basic needs, the player must complete certain assignments, such as learning mini-game skills, mastering a job, defeating villains, using a Power Social, or otherwise fulfill various tasks from the town citizens to accomplish their goal.

There are two different versions of the game, released on console (Nintendo GameCube, PlayStation 2, and Xbox) and handheld (Game Boy Advance and Nintendo DS).

The plot of the handheld version revolves around the protagonist and the city of Miniopolis, which is threatened by Daddy Bigbucks, who plots to buy out every property, demolish them and rebuild them accurately as part of a plan to create an Egopolis in his image.

The console version of The Urbz provides examples of the following tropes:

The handheld version of The Urbz contains the following tropes: