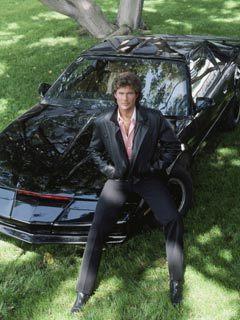 Cool jacket? Check. Cool Car? Doublecheck. They Fight Crime!
"A shadowy flight into the dangerous world of a man who does not exist. Michael Knight, a young loner on a crusade to champion the cause of the innocent, the helpless, the powerless, in a world of criminals who operate above the law...
Michael Knight. A lone crusader in a dangerous world. The world... of the Knight Rider."
— Opening Narration
Advertisement:

A fairly simple concept about a modern cowboy with his horse being the coolest of '80s cars, the Pontiac Trans Am. The original series aired on NBC from 1982-1986.

Police officer Michael Long was wounded when he interfered with criminal activities. His face scarred and everyone thinking he is dead, he accepts an offer by an eccentric millionaire to have his identity changed and his face reconstructed. In return he becomes a high-tech vigilante dealing with criminals who operate above the law. The man behind this offer is Wilton Knight, the owner of Knight Industries. Wilton strongly believes that one man (Michael) can make a difference.

Accepting the challenge, Michael Long becomes Michael Knight. To aid him, he is given a car — and what a car it is! So much horsepower it can't be measured, every electronic device imaginable and then some, impervious to anything short of heavy artillery — and controlled by an Artificial Intelligence with the voice of William Daniels. The Knight Industries Two Thousand — "KITT" — was the real star of the show; David Hasselhoff's Michael was simply a plot device used to give the car something to do and someone to banter with. In fact, according to Wikipedia, the show was created in response to a perceived lack of leading men who could act, with then NBC Entertainment president Brandon Tartikoff suggesting that a talking car could fill in the gaps in any leading man's acting abilities.

Backed by the secretive Foundation for Law and Government (FLAG), headed up by Edward Mulhare's Devon Miles, Michael and KITT pursue a never-ending crusade against, well, just about anybody who seems to be a bad guy that week, defeating them with a turbo boost, a microwave zap, and the durability of a front line heavy battle tank.

For the final season, KITT was given the ability to transform into an armored high-speed mode, and also given a convertible top to showcase Pontiac's new convertible Trans Am. Although the Product Placement is obvious (and the show referred to the car as a Trans Am early on) the brand-name drop was eliminated at the request of Pontiac, as buyers were asking for options that weren't actually available on production models. Thereafter the car was referred to by bystanders simply as a "black T-top."

Few people would argue that the show was intellectual, but it thrived on the Rule of Cool and Hasselhoff's suave performance. Not only that, it was a good family show, essentially aimed towards children yet dressed up as adult fare.

Much like Remington Steele, it had Idiosyncratic Episode Naming with "Knight" as a pun: "Knight of the Phoenix", "A Good Knight's Work", etc.

Not to be confused with Kamen Rider Dragon Knight. Or with George A. Romero's Knightriders.

Here's a character sheet for the original series.

The show has been revived (or attempted to be) several times:

The franchise has also appeared in LEGO Dimensions.

In 2008, a feature-length Pilot Movie aired in February, featuring an assortment of B to C list actors, and a lot of Fords. Fan reaction varied heavily, some feeling it was at worst mediocre with others feeling like it was a total trainwreck. Most felt it was, at the least, more faithful to the feel of the original. Also universally appreciated was ignoring the past attempts at reviving the concept. Ratings were solid though, and NBC ordered it to series, premiering in September. Some fans have nicknamed it KR08 to differentiate from the original Knight Rider.

The new series features the original designer of KITT, Charles Graiman, building a new Knight Industries Three Thousand, this time as a Mustang GT500. Michael Traceur, former Army Ranger and the estranged son of Michael Knight, follows in his father's footsteps, even taking on the name Michael Knight. Michael also has a long history with Graiman's daughter Sarah, who is part of the new team.

The series struggled with its first half-season, with Michael and KITT commissioned as special agents directed by the FBI rather than the "wandering cowboy" angle. NBC also waffled back and forth on how many new episodes it wanted. A major retool was done with episodes 11-12 being a "bridge" to the new concept. Excessive characters were dropped and the show moved back to the "man and his car" formula of the original series. The fandom is still divided on the show's quality, but the retooled episodes were better received.

Unfortunately, the ratings did not improve enough after the retooling (a steady average of 5.5 million viewers), and despite strong international interest and high numbers of video stream viewing and episode downloads, NBC failed to include the show in their official Fall 2009 line-up.

Tropes specifically for the 2008 series:

"One man can make a difference, Michael."