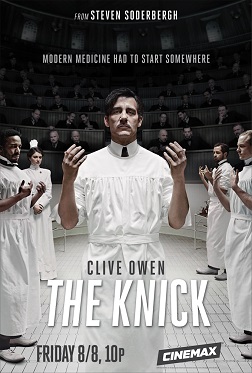 "Though this is madness, yet there is method in't."
"I'm not leaving this circus until I've learned everything you have to teach."
— Dr. Algernon Edwards
Advertisement:

The Knick is a medical drama that premiered on Cinemax in August 2014, and is set in New York in 1900. It stars Clive Owen as Dr. John 'Thack' Thackery, the cocaine-addicted Chief of Surgery at the Knickerbocker Hospital in New York City, who succeeded his mentor and the previous chief, Dr. J.M. Christiansen (Matt Frewer). It also stars Andre Holland as Dr. Algernon Edwards, a brilliant and accomplished black surgeon, who joins The Knick as assistant chief of surgery, over Thackery's objections and despite the personal disdain of much of the hospital's all-white staff. Thack's work is overseen by hospital administrator Herman Barrow (Jeremy Bobb), a highly competent bureaucrat whose well-informed racist Social Darwinist worldview takes a back seat to his ruthless pragmatism and air of politeness. Thack and Barrow also have to contend with the wishes of the socially-progressive Miss Cornelia Robertson (Juliet Rylance), who represents her father, Captain August Robertson (Grainger Hines), who is the financially-strapped hospital's primary benefactor.

All twenty episodes of the first and second seasons have been directed by Steven Soderbergh, who already announced he'd leave the show in the hands of different filmmakers should the show go forward with a third season. However, in March 2017, Cinemax announced the series was officially canceled.