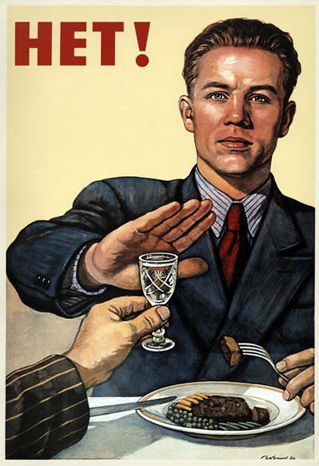 Translation from Russian Cyrillic: "No!"
>buy kerrek a cold one
The Kerrek is a teetotaler and is offended by your offer. He pounds your head into the ground. You dead.
— Strong Bad Email #110 "for kids", when Strong Bad plays Peasant's Quest
Advertisement:

Teetotalism refers to either the practice of or the promotion of complete abstinence from alcoholic beverages. A person who practices (and possibly advocates) teetotalism is called a teetotaler.

This is particularly noticeable when a badass character with a Dark and Troubled Past curiously abstains from drinking with the rest of the group, but can happen with any type of personality.

Common reasons for refusal to drink include:

A common prank is to trick this guy into drinking a "Long Island Iced Tea" (which is an alcoholic drink). If this character ever utters the words "I Need a Freaking Drink!", it is usually a sign that things have gotten really bad.

See also Straight Edge, Smug Straight Edge, Straight Edge Evil, and the Dry Crusader who is the more militant and self-righteous version of The Teetotaler. Unrelated to I Do Not Drink Wine. Direct opposite of The Alcoholic. These guys often prefer a cup of tea — though that's not where the "tee" in teetotaler comes from, common myth to the contrary

. It's from "T-Total Abstinence." Sometimes used to describe one who refuses to use other recreational drugs as well.