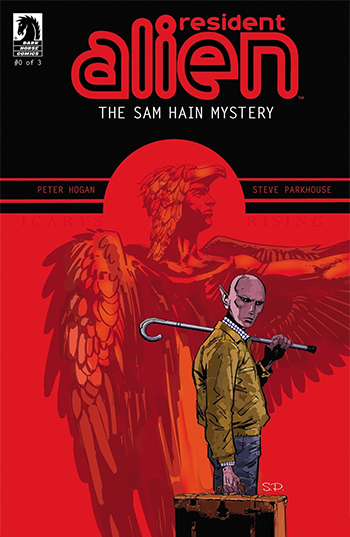 Resident Alien is a mystery/science fiction comic book series written by Peter Hogan and drawn by Steve Parkhouse. The story stars Dr. Harry Vanderspeigle, a benign alien stranded on Earth that assumes the identity of a semi-retired doctor and lives alone in a cabin in the small town of Patience, Washington. He uses a telepathic disguise to appear to the townspeople as a normal human, but the reader always sees him as an alien. After the town's only other physician is murdered, he ends up having to take up the job as town doctor, becoming more involved with the lives of the townspeople and enjoying their newfound company in the process. He solves local murder mysteries with the help of one of his nurse co-workers, Asta. Meanwhile, unbeknownst to Harry, the government is suspicious of him and is trying to track him down.
Advertisement:

The comic is published by Dark Horse Comics as a series of episodic mini-series, with one mini-series released per year. Each mini-series is then compiled into a volume at its conclusion. Series include:

It also includes one shot stories in the following:

You can check it out on Dark Horse's website

for print copies or on Comixology

for digital copies. The very first issue of the series, Welcome to Earth Issue #0, is also available as a free to view motion

In 2018, Syfy announced they are developing a Resident Alien TV series adaptation of the comic book starring Alan Tudyk as Harry. It began airing in January 2021.