Some Call Me "Tim" 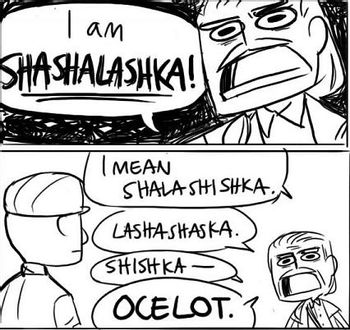 "Identify yourself!"
Black Mage: The God of Undeath has a name of twenty-seven syllables spoken simultaneously by six ever-screaming mouths.
Cleric: Yeah. Or Jessie to his friends.
— 8-Bit Theater
Advertisement:

An Overly-Long Name is a bane of Puny Earthlings, many of whom broke their tongues in the attempt to pronounce it, even if they somehow manage to memorize it.

Some beings with overly long names realize that it would quickly become frustrating if every second person they told their full name to struggled in vain to pronounce it correctly, and thus offer a shortened version. For comedy value, this shorter version may be a mundane human name, such as Bob or Max. Can overlap at times with They Call Me MISTER Tibbs!.

The trope namer is Monty Python and the Holy Grail, although it's not a confirmed example. While it was revealed by the Pythons that Tim the Enchanter was scripted with another name that John Cleese could never remember, there is no evidence of it being long or unpronounceable. Also see Translation: "Yes". Not to be confused with Tom the Dark Lord, where the Dark Lord's name actually is something normal.

Truth in Television, in fact, most people have at least one middle name that is omitted when referring to them for simplicity's sake, but keep Real Life examples for case where the person's full name is particularly long enough to contrast with the commonly used short form.