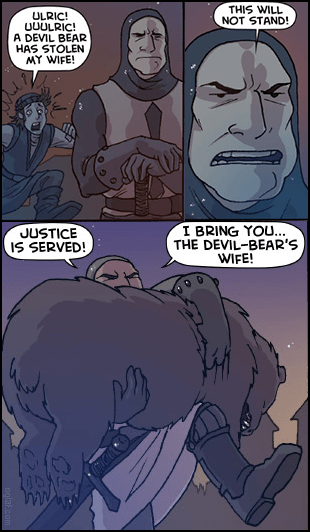 "Actually...I wanted my wife back."
"Dear mister Jane, I don't like to be slandered in the media, especially by a dirty money-grubbing fraud. If you were a real psychic, instead of a dishonest little worm, you wouldn't need to open the door to see what I've done to your lovely wife and child."
— Red John, The Mentalist
Advertisement:

A character seeks revenge against their enemy by harming someone the enemy cares about.

Motives vary on this: the avenger may think it would hurt worse, they may think it's a more equivalent crime if someone close to them was hurt, or it may even be something else.

Often, the justification is that they want the person to suffer as they have suffered as a result of the act. Sometimes it's justified by claiming that the victim profited from the original crime. Of maybe the intended victim of the revenge is protected in some way, or if direct punishment or pain would not be satisfying enough. Killing a Death Seeker would not accomplish the level of mental anguish required for true vengeance, for example, but killing one of their loved ones while they live on...well, seeing your loved ones taken away from you, knowing that you yourself caused it, can be a Fate Worse than Death

Sometimes the villain feigns this to lure the hero within striking distance. If the villain is feeling particularly sadistic, they won't just torture and kill someone the hero cares about, they'll make the hero watch.

If the method of revenge isn't murder (it's usually murder), Cold-Blooded Torture may also come into play, possibly with a Past Victim Showcase. Particularly horrific when the target is a child, but no matter how horrible the crime being avenged (or how non-innocent the victim is), Revenge By Proxy is often a Kick the Dog moment, since the actual victim is considered only as a means to an ignoble end.

Villains may regard one of theirs as valuable as several of the hero's, and so regard killing several victims as mere even retribution.

Frequently a Bewildering Punishment for the victim, though this trope is more likely than most to have a Motive Rant.

Compare Misplaced Retribution and Sins of Our Fathers. See also Revenge Through Corruption when the method of revenge is trying to inflict a Face–Heel Turn on someone the character cares about. Threatening to do this is I Will Punish Your Friend for Your Failure or And Your Little Dog, Too!. Contrast Trial Run Crime.

Logical Journey of the Zoombinis