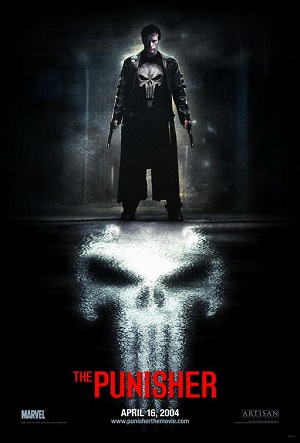 Those who do evil to others - the killers, the rapists, psychos, sadists — you will come to know me well. Frank Castle is dead. Call me... The Punisher.
Advertisement:

FBI agent Frank Castle (Thomas Jane) retires just after an undercover assignment that led into the death of Bobby Saint, the son of famous Tampa crime boss Howard Saint (John Travolta). Holding Castle responsible for the death of his son, Saint orders Frank's entire family to be butchered during a family reunion; the kill squad leaves Frank for dead after slaughtering his family and killing his wife and son right before his eyes. Burnt out and haunted by memories of his murdered family, Frank returns to Florida and sets out to avenge his family. Becoming a one-man judge, jury and executioner, Frank decides to punish Howard Saint and his associates for their crimes — and he isn't willing to give up until they are all dead.

The film has an unofficial/unauthorized sequel starring Thomas Jane and Ron Perlman, titled Dirty Laundry. However, the 2005 video game The Punisher (THQ) is technically considered to be the only known official follow-up to the movie.