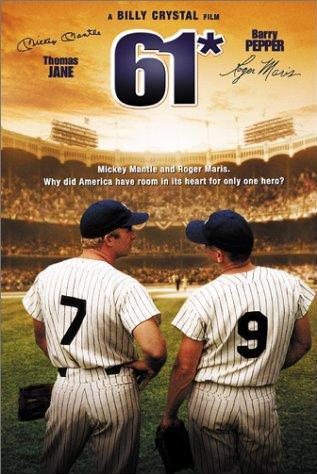 "Why did America have room in its heart for only one hero?"
— Tagline
Advertisement:

61* is a 2001 Based on a True Story sports film directed by Billy Crystal.

In 1961, the New York Yankees seemed poised to make another run at the World Series, having lost a tough seven-game series the year before. Fans are highly optimistic due to the wealth of talent in pinstripes, led by Living Legend Mickey Mantle (Thomas Jane) and the previous year's MVP, Roger Maris (Barry Pepper). In addition, with more games on the schedule to accommodate new teams joining the league (read: more roster spots for fringe pitchers), there is serious belief that someone could make a run at Babe Ruth's fabled single-season home run record of 60, set in 1927.

As the season progresses, the Yankees are winning, but even more importantly, both Mantle & Maris are on pace to break Ruth's record. When the record has a real shot of being felled, sides are taken from everyone in the baseball world. Fans rally behind Mantle, already regarded as one of the best to ever play and heir apparent to Yankee greatness; his charming persona, movie-star looks, and embracing of the New York spotlight makes him the most beloved man in the Bronx. Meanwhile, Roger Maris is his complete antithesis; perceived as not a "true Yankee" due to being acquired in a trade, his country-boy roots show through his quiet, private personality amidst the hoopla, which leaves baseball fans — especially Yankee fans — uninspired. The baseball higher-ups also seem to conspire against both men, as commissioner Ford Frick, in an effort to preserve the sanctity of Ruth's record, rules that one must best Ruth's record in 154 games, as Ruth did; if it is beaten in the expanded eight games beyond that point, it would be treated as a separate record.

With Mantle struggling with his alcohol-related issues and mounting injuries, and Maris combating the tough media and lack of support as he pulls away from Mantle and stays with Ruth's pace, all while both are still trying to lead the team to a championship, what should be a celebrated chase for history is instead a stress-inducing trial that will test both men's reserve as they chase a ghost and a number.