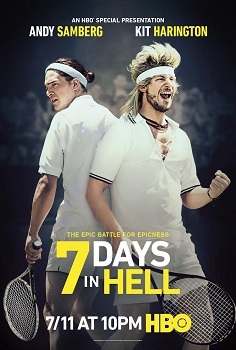 The True Story of the Most Intense Game of Tennis Ever.
Advertisement:

7 Days in Hell is a 2015 HBO comedy Mockumentary starring Andy Samberg and Kit Harington as Aaron Williams and Charles Poole, two tennis players locked in the longest tennis match of all time, unable to score a match point.

Samberg followed this film up with Tour de Pharmacy, a Spiritual Successor looking into the seedy world of professional cycling.