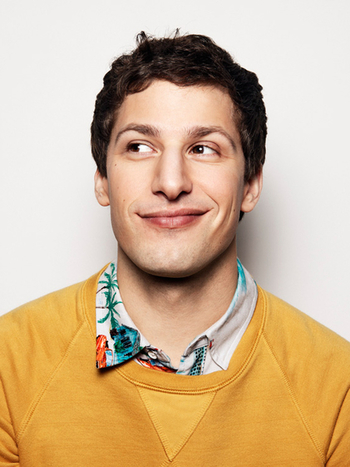 He's perhaps best known for his seven years as a cast member and writer on Saturday Night Live, where he created (and often starred in) the SNL Digital Short series of pre-taped sketches, opposed to filmed live on set. During this era of his career, he also headlined the 2007 comedy Hot Rod and co-starred in I Love You, Man opposite Paul Rudd and Jason Segel.

Upon his departure from SNL in 2012, he appeared in the films That's My Boy opposite Adam Sandler, and Celeste And Jesse Forever with Rashida Jones, as well as the Hotel Transylvania series. He also co-starred in the first season of The BBC sitcom Cuckoo.

From 2013 to 2021, he starred in the comedic police procedural Brooklyn Nine-Nine as Detective Jake Peralta, for which he won his first Golden Globe.

In addition to his acting and writing, he's also one-third of musical parody group The Lonely Island, who often appeared with him in SNL Digital Shorts. They've released four albums to date, and released the mockumentary film Popstar: Never Stop Never Stopping in 2016.

Discography (with The Lonely Island):