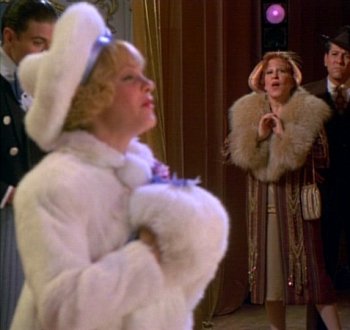 Behind this child actor is a fame-hungry parent.
"I've always dreamed of becoming an actress. That's not why I'm pushing Olivia to do it. Is it suspicious that I brought that up unprovoked?"
— Olivia's mother, Family Guy
Advertisement:

Some parents really want their kids to become child stars. And they'll do anything they can to make that happen, up to and including interfering in the kids' work. They'll do this even at the risk of derailing the production, straining their relationship with their kids, or even endangering their kids outright. Sometimes this helps their kids start successful careers, but more likely, it'll actively hurt the kids' chances when they lose gigs because the directors don't want to deal with the parents. And failure usually turns out badly for the kid.

A Stage Mom is similar in theme to an Education Mama, but whereas Education Mama usually just wants what's best for her child, the Stage Mom is driven by pure narcissism. She's a massive Control Freak, persecuting other people's children and being incredibly pushy with her own. It's clear that she has self-serving reasons for pushing her kids into show business, wanting to vicariously experience the fame and fortune she dreamed of herself. Sometimes she may be a failed actress or musician and this is the next best thing. The worst cases overlap with The Svengali, exploiting their children for their own gain.

The family's financial status greatly plays a part in how the Stage Mom behaves. If the family is poor, she might be pushing her child to have a better life than she had, or less altruistically, she sees their talent as a cash cow to milk for all it's worth. Extra points if the kid's performing career is the family's most stable source of income. If the family is wealthy, the mom might want to project the image that her little darling is perfect in every way. And if she's a successful performer herself, she might be grooming her child in her own image—whether the kid wants it or not—because her own time in the spotlight is up.

If she has other children that aren't performers, don't ask about her relationship with them.

If the child is an adult who had a more conventional rise to fame, the Stage Mom could still reappear later in life. This usually happens when she realizes that she could manipulate her kid's fame for her own gain. Bonus points if the parent wasn't involved in the kid's life growing up but is now interested in a relationship. Most likely, the kid winds up telling her off for her behavior, she realizes the error of her ways, and the plot is resolved before the episode ends.

Although Real Life stage parents can come in both sexes, the fictional portrayal is almost Always Female, hence the trope name. This is because pursuing the performing arts is not seen as very masculine. In fiction, the male version is almost always a Sports Dad (as opposed to a "Stage Dad") who pushes his children into becoming star athletes and gets more worked up during games than the kids actually playing. This variation is particularly focused on living vicariously through his kids and trying to make up for his own failed ambitions.

This is a major reason for Dawson Casting in Real Life, as producers really don't like dealing with these people.

A subtrope of Vicariously Ambitious.