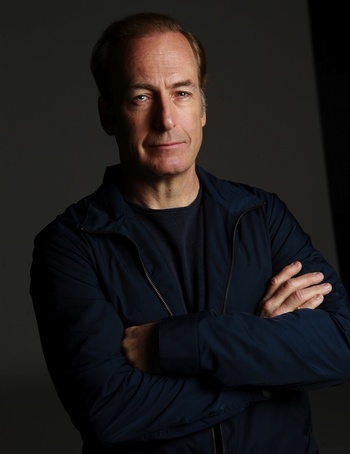 Better Call Bob!
"I've spent most of my career in ensembles, and I'm good with that."
Advertisement:

He's known for co-creating Mr. Show with Bob and David with David Cross (he's the former in the title), being a cast member on The Ben Stiller Show, his work as a director and for his role as Saul Goodman on Breaking Bad. Saul Goodman was such a popular character that he eventually got his own Spinoff series, Better Call Saul.

He was a member of The Second City and wrote for Saturday Night Live. (People who only know him for his recent work are often surprised to learn that he was the writer of the beloved Matt Foley: Motivational Speaker sketches since Chris Farley generally did not write his own sketches on the show). He also helped Tim & Eric get their start on Adult Swim.

Some of Bob Odenkirk's Credits include: