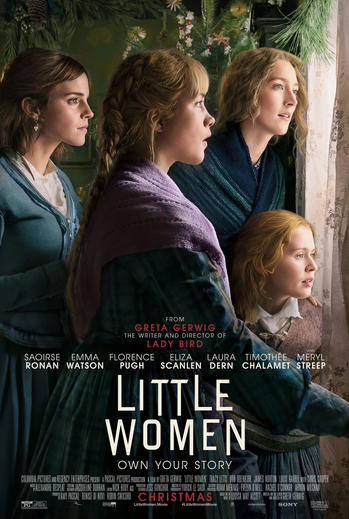 Little Women is a 2019 coming-of-age period drama written and directed by Greta Gerwig, based on the 1868 novel of the same name by Louisa May Alcott. It is the eighth film adaptation of the book.

The film generally follows the same story as the book it's based on, and focuses on the coming-of-age of the four March sisters (Meg, Jo, Beth, and Amy), as well as their childhood friend Laurie, during and after The American Civil War. It differentiates itself from other adaptations with an anachronic structure and an emphasis on the overall March family rather than Jo specifically.

Tropes specific to this adaptation of Little Women include:

Events slow down as Amy, in a carriage, sees her childhood friend Laurie walking in the opposite direction.

Events slow down as Amy, in a carriage, sees her childhood friend Laurie walking in the opposite direction.