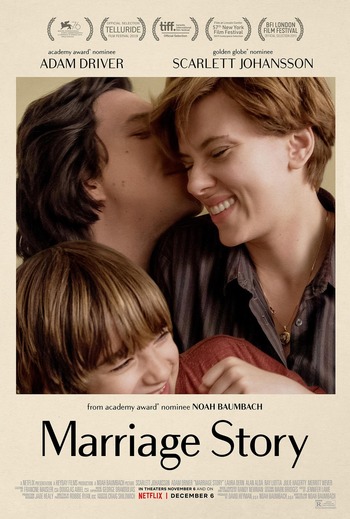 Nicole: I thought we should talk.
Charlie: Okay.
(long silence)
Charlie: I don’t know how to start.
Advertisement:

Marriage Story is a 2019 dramedy film directed by Noah Baumbach, starring Adam Driver and Scarlett Johansson. It premiered at the Venice Film Festival in late August and had a limited theatrical run in November before being released by Netflix on December 6.

Charlie (Driver) is a prominent New York-based theatre director. Nicole (Johansson) is his lead actress. They were married for 10 years and are parents to an 8-year-old son, Henry, but are now separating.

Their separation coincides with Nicole's move to Los Angeles, where she has been offered a role in a TV pilot. Los Angeles is Nicole's home and she intends to take Henry with her to settle there. Charlie's life and career are built around New York and he cannot imagine relocating from the city. But he also cannot imagine living away from Henry.

So a separation that began amicably heads to a bitter court battle, especially once Nicole and Charlie each hire high-powered attorneys (Laura Dern and Ray Liotta) who both relish the opportunity to "win" this no-win situation for their respective clients.

"...I'll never stop loving him, even though it doesn't make sense anymore."