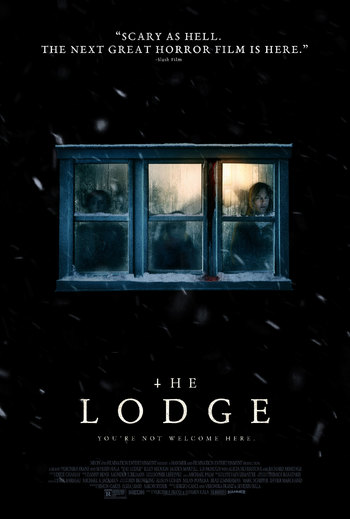 The Lodge is a 2019 psychological horror film directed by Veronika Franz and Severin Fiala (of Goodnight Mommy fame).
Advertisement:

The film revolves around journalist Richard Hall (Richard Armitage) and his children Aidan (Jaeden Martell) and Mia (Lia McHugh). Following a family tragedy that deeply traumatizes the two kids, the tension between them and Richard is amplified upon Richard's insistence that the kids bond with his new girlfriend Grace (Riley Keough), who he plans to marry.

Christmas proves an opportune time for Richard to enact his plan: having the kids and Grace stay at the family's remote lodge for the holidays. Though Aidan and Mia eventually accept, they hold firm opposition to Richard's marriage plans and suspicions towards Grace — sentiments not helped by Richard promptly departing due to work obligations, leaving them essentially isolated from civilization.

Just as the three begin to live in relative peace, a snowstorm hits and traps them in the lodge, at which point strange and increasingly frightening events occur, seemingly summoning long-buried relics of Grace's dark past...