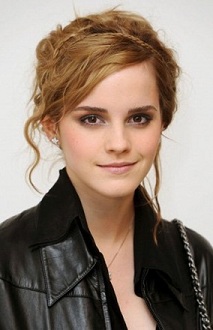 "Hermione just stole all of our shit."
— This Is the End
Advertisement:

She's best known for playing Hermione Granger in the Harry Potter films. Her following roles include a small part in My Week with Marilyn, Princess Pea in The Tale of Despereaux, the female lead in The Perks of Being a Wallflower, Nicki in Sofia Coppola's The Bling Ring, Ila in Darren Aronofsky's 2014 Biblical epic Noah, and Belle in Beauty and the Beast (the Disney live-action remake).

As of July 2014, she is also a Goodwill Ambassador for the United Nations Entity for Gender Equality and the Empowerment of Women, campaigning for women's rights and gender equality.

No relation to Emily Watson.

Tropes that apply to Watson include: