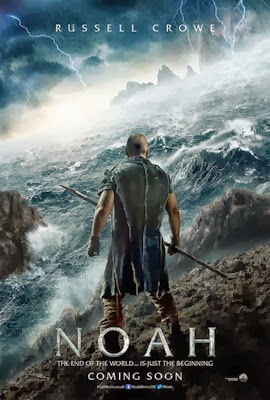 Naameh: Noah? What did He say?
Noah: He's going to destroy the world.
Advertisement:

Noah is a "Bible punk" film directed by Darren Aronofsky and starring Russell Crowe, Jennifer Connelly, Logan Lerman, Emma Watson, Ray Winstone, and Anthony Hopkins. Adapting the Book of Genesis, the Kaballah, and other sources, it is a retelling of the story of Noah who after seeing visions of a horrifying deluge, is inspired to build an ark to preserve life on Earth. Along the way, he faces resistance from fallen angels known as the Watchers (who later help Noah's cause for a shot of Redemption in the eyes of The Creator), human armies led by the villainous king Tubal-Cain, as well as tension within his own family and self-doubt about the worthiness of mankind to survive.

A passion project for Aronofsky, he had been working on various versions of the screenplay for years, even teaming up with Niko Henrichon to adapt his vision into a French-language graphic novel, "Noé: Pour la cruauté des hommes" ("Noah: For the Cruelty of Men") published in 2011. An English-language translation was released alongside the movie.

The film was released in America on March 28, 2014. Trailers can be seen here,

Methuselah protects the watchers from an entire army.

Methuselah protects the watchers from an entire army.