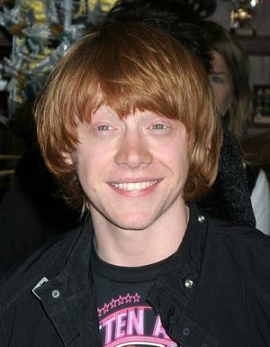 "After being in Harry Potter, I believe a bit more in magic than I did before."
Advertisement:

Rupert Alexander Lloyd Grint (born August 24, 1988 in Harlow, England) is a British actor, best known for playing Ron Weasley in the Harry Potter films. Of the three principles, he's the most similar to his character in Real Life, including the easy-going personality, the large family, and even the fear of ginormous spiders. Grint got an audition for the part of Ron by sending in a tape of himself performing a rap while dressed as his female drama teacher. Much to the disappointment of his fans (though presumably to Grint's relief), this tape has failed to turn up on the Internet.

Within the world of Harry Potter, Ron is Overshadowed by Awesome and is often thought of simply as his best friend Harry Potter's sidekick. As it happens, Grint is in a similar situation in Real Life as the media tends to ignore him in favor of Daniel Radcliffe and Emma Watson. However, while Ron sometimes gets touchy or jealous about his sidekick status, Grint seems to lack his character's inferiority complex. On the plus side, the situation gives him the ability to slip under the radar. After all, Radcliffe caused a stir by appearing naked in Equus, while Grint made the very mature independent film Cherrybomb (2009) to less fanfare.

His post-Potter career, like his two Potter co-stars, has found him trying several more diverse roles to avoid typecasting. He is starring in the Norwegian anti-war film Into The White, and has recently signed on to his first American film role in The Drummer, alongside Aaron Eckhart and Chloë Grace Moretz. He has also starred as Jonny, the loser manager of a hippie rock band in Moonwalkers.