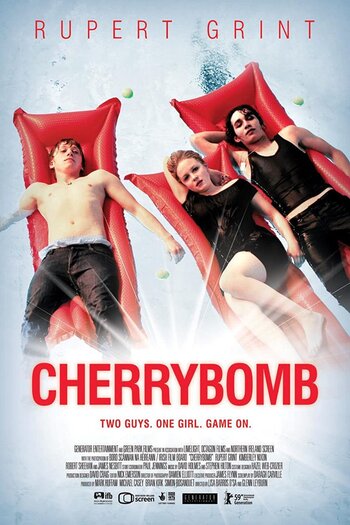 "So what are we talking about here? A threeway?"
— Luke
Advertisement:

Cherrybomb is a 2009 movie which follows the lives of three teens as they embark on a weekend of sex, drugs and debauchery, with disastrous consequences.

Irish teenager Malachy (played by Rupert Grint of Harry Potter fame), a hardworking straight-A student who feels stifled by his safe, suburban life, becomes infatuated with his Boss' daughter, the beautiful but manipulative Michelle (Kimberly Nixon). Unfortunately, things start to spiral out of control when Malachy's rebellious best mate Luke (Robert Sheehan) also falls for Michelle's charms, and the two boys find their friendship starting to crumble as she encourages them to carry out ever more dangerous acts in their quest to win her affections.

Despite this movie ostensibly dealing with a Love Triangle, it has been noted by critics, fans, and even cast members that it does contain a certain homoerotic subtext. Lets just say that it has amassed a small but dedicated following of Yaoi fangirls, and leave it at that.

Not to be confused with the 2011 Indie film of the same name.