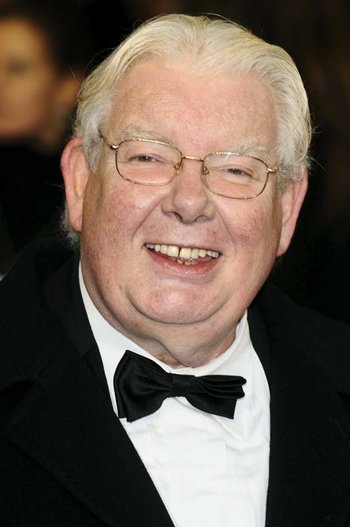 "However long you live, in your heart you will always feel emotionally as you did when you were seventeen or eighteen. You burn the same way you burned. You lust the same way you lusted. You despair the same way you despaired. You feel guilt. You feel aggression. The emotions are permanently on fire, but the sack around them is going to stab you in the back by falling to bits."
Advertisement:

Richard Thomas Griffiths, OBE (31 July 1947 — 28 March 2013) was an English actor. He was born in North Yorkshire and, after a difficult childhood, studied drama in Manchester. Like many of his fellow countrymen, he started his acting career with William Shakespeare adaptations, playing Constable in The Comedy of Errors and Falstaff in The Merry Wives of Windsor, and later starring as King Henry VIII. After a few years on the stage, he began to appear in television and movies. His first leading role on the small screen was as Henry Jay in Bird of Prey. Some of his film roles in the 1980s included appearances in Gandhi, Chariots of Fire, Shanghai Surprise, and Gorky Park. His most famous film role from that time, though, was as Uncle Monty in Withnail and I.

In the 1990s, Richard Griffiths appeared in more shows and movies, such as The Naked Gun 2½, King Ralph, and Inspector Morse. He starred in the 1994-1997 show Pie in the Sky as gruff retired policeman Henry Crabbe. But his most widely seen role was as Harry Potter's cruel uncle Vernon Dursley, a role he played in five of the eight Harry Potter films. The 2000s would also see his most-awarded role, as Hector in the play and movie The History Boys. He followed this up with appearances in Pirates of the Caribbean, The Hitchhiker's Guide to the Galaxy (2005), Equus, and Henry V. His acting career spanned four decades.

Sadly, Richard Griffiths died in 2013 from complications after heart surgery, and was fondly remembered by his many fellow actors, such as Richard E. Grant, Paul McGann, and Daniel Radcliffe.

Also worth noting is that if ever he heard a phone go off during one of his performances, Griffiths would break the fourth wall to berate the audience member responsible for it, sometimes even threatening to end the performance then and there in retaliation.