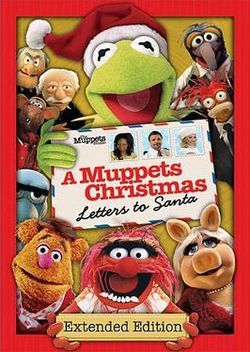 A 2008 Christmas Special starring The Muppets.

Kermit, Gonzo, Fozzie and the gang are all living in a New York City brownstone (for reasons not really explained), where the only human tenants are their adorable neighbor Claire (Madison Pettis) and her mom (Jane Krakowski). It's Christmas Eve, there's no snow on the ground, and for the first time ever, the Muppets aren't planning to spend Christmas together. Kermit and Miss Piggy are headed for the Caribbean, Gonzo is going to Hawaii, and Fozzie is heading out on a comedy tour. Before they go, however, they make a last-minute trip to the post office to mail their cards; Gonzo also promises to mail Claire's letter to Santa Claus.

An impromptu musical number at the post office creates some minor havoc, and Gonzo discovers that a few letters to Santa — including Claire's — have been left in his possession. Anxious to make sure they reach their intended recipient in time, he persuades some of his fellow Muppets to help him get to the North Pole to deliver them personally.

Notable as the first Christmas production for The Muppets after Disney bought the franchise, though it premiered on NBC rather than ABC. Followed by the 2011 feature film The Muppets, and in a holiday context, by 2013's Lady Gaga & The Muppets Holiday Spectacular.

This special includes examples of the following: