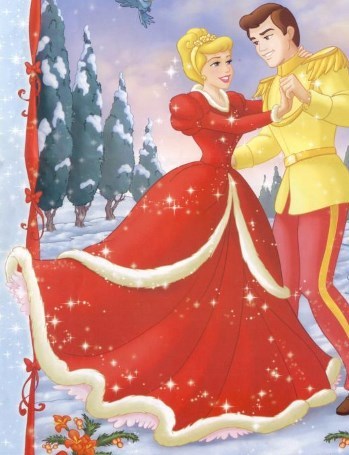 A dress that's pretty, merry, and warm enough for dancing out in the snow.

◊
"It may snow all night, but I'll never feel cold!"
— Cinderella, "Dressed for the Ball"
Advertisement:

A grand, old-style dress designed to clearly look as though intended to be worn during the holiday season.

The standard form is a dress with a tasteful bodice (though it can include an Impossibly-Low Neckline or Absolute Cleavage), a full length (usually) bell-shaped skirt, and a generous amount of trimmings such as fur (that's often snowy white), jewelry, ribbons, winter symbols, like snowflakes, Sparkles, sprigs of holly, etc. Best designed to wear during a formal dance, lounging around the fireplace, or walking around on a clear night after the snow fell.

Red is the most common color, followed by white, silver, blue, (those three are especially worn by a Winter Royal Lady to give her a wintry appearance), green, and even gold.

This is meant to equate the lady wearing it with Mrs. Claus, even though that character's typical outfit is of the homely 19th century grandmother type, while these dresses can be quite extravagant.

This trope may date back to Victorian times (especially if royalty dressed up for Christmas).

Side-Story Bonus Art, particularly with anime and manga, often has holiday pics with female characters wearing these dresses (just not as often as sexy Christmas dresses), as does a majority of chapters/episodes that take place in December. It's also common in Christmas themed Virtual Paper Doll games.