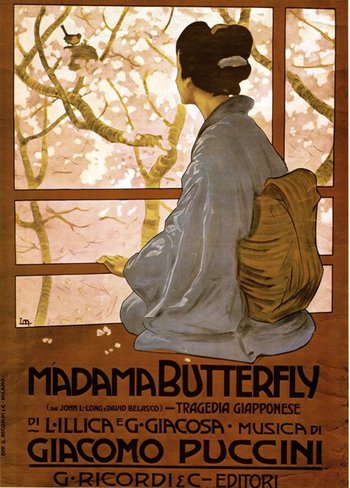 Leopoldo Metlicovitz's art-nouveau poster for the 1904 world premiere performance.
Madame Butterfly (Madama Butterfly in Italian) is a three-act opera by Giacomo Puccini. Based on both the French novel Madame Chrysanthème and the American short story and play Madame Butterfly and Madame Butterfly: A Tragedy of Japan, it tells the story of Cio-Cio San (nicknamed Butterfly) in 1904, Nagasaki, Japan. Cio-Cio San, a soprano and beautiful 15-year-old girl, is engaged to be married to a U.S. Naval Officer named Pinkerton. He confides to the American consul Sharpless that he admires her for her innocence and beauty, like a young delicate butterfly, and the fact that he can just as easily pluck her wings. He only wants to temporarily marry her until he finds an American bride but lets the lovestruck Butterfly believe that the marriage is permanent. Sharpless warns Pinkerton that treating this union casually may have tragic consequences. The wedding takes place, but Butterfly's uncle disapproves of the fact that she renounced her religion for her husband. Her family disowns her, but Pinkerton kicks out the relatives and comforts her.
Advertisement:

In the next act, three years have passed and Pinkerton is off and gone. Butterfly has lived alone with her maid Suzuki. While Suzuki claims that Pinkerton will never return, Butterfly insists that he will return to her. Sharpless then shows up at her home with a letter from Pinkerton. Butterfly excitedly thinks the letter says he will be back soon. Sharpless is not sure what to say to her since the actual contents of the letter reveal that Pinkerton is indeed returning to Japan but that he has moved on with his life and no longer attaches himself to his Japanese wife. When Sharpless tries to tell Butterfly this, she reveals that she gave birth to Pinkerton's child after he left. She calls him Sorrow but declares faithfully that when her husband comes home the child will be called Joy. Sharpless cannot bear to crush such a loyal heart and has to leave without telling her of Pinkerton's true treachery.

After he leaves, Butterfly sees Pinkerton's ship in the bay. She and Suzuki joyfully prepare the house for his arrival and then wait all night for him.

When, however, he arrives, Butterfly has fallen asleep, exhausted by her vigil. But Pinkerton does not arrive alone: He arrives with his wife Kate, who he married after leaving Japan. Informed of the existence of the child, Pinkerton and his wife have come to take him away and raise him in America. Unable to face his guilt, Pinkerton leaves his wife to handle it. Butterfly's despair upon finding this woman in her home does not shake her composure. Kate begs for Butterfly's forgiveness and promises to treat the child as her own. With hardly any other choice, Butterfly accepts this, gives up her child, and turns to all that she has left: To die with honour when one can no longer live with honour.

It's an opera. What do you expect? A happy ending?

This opera has had countless adaptations, including one film adaptation in 1915 with Mary Pickford and another in 1932 starring Sylvia Sidney as Cio-Cio San and Cary Grant as Pinkerton. One with a page on this wiki being Miss Saigon and Mademoiselle Butterfly. It also inspired the play M. Butterfly and the 1922 film The Toll of the Sea, and received quite a few references in Weezer's album Pinkerton. Also the source of the name of Bayonetta's main demon.

Tropes used by the opera: