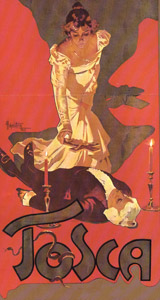 Tosca is an opera by Italian composer Giacomo Puccini, based on a play by Victorien Sardou. It is often cited as an operatic version of Grand Guignol horror-melodrama, the forerunner of today's splatter movies.

On the eve of Napoleon's occupation of Rome, the painter Mario Cavaradossi hides his friend, escaped political prisoner Cesare Angelotti, from the police. Unfortunately this brings both him and his sweetheart, the singer Floria Tosca, to the attention of the villainous chief of police Scarpia. Scarpia arrests Cavaradossi and demands that Tosca spend the night with him, then the painter's execution will be fake, and the lovers will be able to leave Rome. Tosca agrees, but when Scarpia comes to embrace her, she stabs him in the heart with a knife. Unfortunately, Scarpia did not intend to release Cavaradossi at all, and the execution turns out to be real. Seeing her lover dead and Scarpia's henchmen running to get her, Tosca leaps off the parapet of the Castel Sant'Angelo, crying that she will meet Scarpia before God.

Oh, and did we mention that poor Angelotti commits suicide somewhere in the middle of the second act? This gets us 4 dead people by the end of the opera.

Tosca is the Trope Namer for: