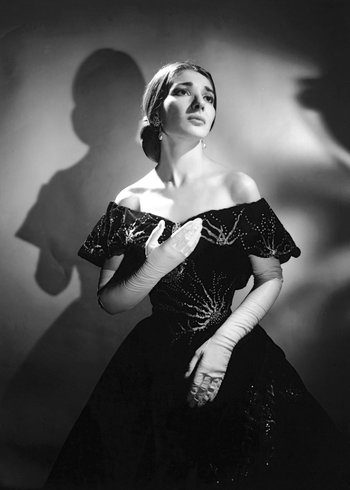 La traviata is an opera in three acts by Giuseppe Verdi, set to an Italian libretto by Francesco Maria Piave. It is based on La dame aux Camélias (1852), a play adapted from the novel by Alexandre Dumas, fils. The title "La traviata" means literally The Fallen Woman, or perhaps more figuratively, The Woman Who Goes Astray. It was originally titled Violetta, after the main character." -The Other Wiki. It is a pretty clear inspiration for Moulin Rouge!.

Violetta Valéry, the famed Parisian courtesan, appears to have everything in life, free to pursue anything and anyone that strikes her fancy. But when the young Alfredo Germont falls in love with her, she is faced with the emptiness off her own life and wonders whether parties, pleasure and empty friendships are worth more than the true love offered to her by the kind and caring Alfredo. Some months later, the pair is living together happily, until Alfredo's father arrives to ask her to break off the relationship, as his daughter's fiancé simply cannot marry a woman whose brother lives with a former courtesan. Unable to resist the pleas of a loving father, the truly good-hearted Violetta agrees and flees back to her now-hated former life. Alfredo, unbelievably hurt by her betrayal of her promises and his love, rushes after her. He finds her at a party and proceeds to humiliate her in front of society by throwing money as 'payment' for their time together her way. He has no idea that Violetta is terminally ill with consumption. Alfredo's father later reveals to his son the noble reasons for which Violetta left him. He hurries back to her, and announces his plan to bring her with him back to their happy life in the country, but it is too late. Violetta cannot even get out of her bed anymore. Comforted only by the fact that she is with Alfredo in her last moments, she succumbs to her illness.

It first premiered at the Teatro La Fenice in Venice on March 6th, 1853, where Verdi was forced to relocate the contemporary setting back to the 18th century by the censors, and it wasn't until the 1880's when the original 1850's setting began being used. It has since become one of the most popular operas, and has seen frequent performances around the world.

Tropes for this opera include: