These Hands Have Killed 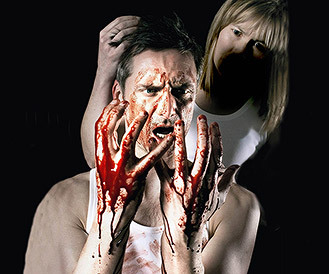 And it never, EVER comes out.
Will: There's no such thing as getting used to what you experienced. It bothers me a lot. I worry about nightmares too.
Abigail: So killing somebody, even if you have to do it... it feels that bad?
Will: [Beat] It's the ugliest thing in the world.
— Hannibal
Advertisement:

During an important part of the story, our hero, or just the character in focus, kills someone or something. This death could be popping his murder cherry, or it could just be one of the first kills he thinks is wrong. Even if it was self-defense and completely justified, he still feels guilt-ridden. He looks down in a My God, What Have I Done? moment, shocked at his hands because they just became accomplices in taking a life. Often this leads to a Heroic BSoD particularly if the hero is especially moral or idealistic. The act itself is usually part of a Batman Grabs a Gun situation with the hero breaking a solemn vow that he swore never to break.

"These hands have killed! I've got blood on my hands, and I'll never be the same again..."

Could be followed by Out, Damned Spot!, but it doesn't have to be. This has nothing to do with washing one's hands of blood, metaphorically or literally — only with acknowledging the shedding. In some cases, murder isn't even required to invoke this trope; a sufficiently broken or driven mad character may gaze upon their hands in this way.

This is a Sub-Trope to My God, What Have I Done? — the character in question experiences that guilt while staring horrified at his hands. If this trope is in a character's backstory, it's Sympathetic Murder Backstory. Compare Bleed 'Em and Weep, where the character literally cries after taking life/shedding blood. If a character is contemplating their hands for an entirely different reason, usually drug-related, then see Contemplating Your Hands. If the character thinks what he has done is inherently wrong, he may become The Atoner. If he ultimately decides it was necessary, he may decide I Did What I Had to Do and, in darker settings, start his path down Gaining the Will to Kill.

As a Death Trope, expect the possibility of unmarked spoilers.

Alternative Title(s): Blood On These Hands