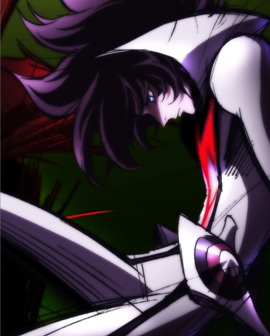 Ruin is the salvation of man and machine.
"I know nothing, not even myself. Yet my enemies call me Casshern."
Advertisement:

Casshern is a humanoid robot who finds himself in a decaying, desolate world. A plague known as Ruin kills humans and robots alike, and apparently Casshern is responsible for having slain their guardian entity Luna, the only one who could have healed the world. Unfortunately, he isn't sure how much of this is true, since he has amnesia. All he knows is that he is built for combat, immune to the Ruin, and able to regenerate any damage — and that rumor has it if a robot devours Casshern then they will live forever.

A Darker and Edgier Continuity Reboot of the post-apocalyptic 1970s anime Neo Human Casshern, the 2009 Madhouse anime Casshern Sins focuses on the sudden appearance of death among robots who once thought themselves immortal.

Produced in 2008, the series made its US television debut on Toonami beginning on May 26, 2012 (though it aired a year before that on the Funimation Channel), as a launch program for the revived block. Is also available (in some countries) on Youtube.