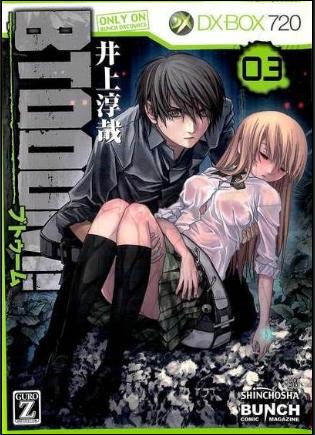 On the surface, Ryouta Sakamoto, aged 22, looks like the very definition of NEET: unemployed, lazy, unremarkable, and still lives with his mother. In the online gaming world, however, he is famed as one of the best players of "Btooom!", a highly popular game where players throw bombs at enemies and harvest their chips.

...Until the day he wakes up in a tropical island, with no clue as to how he got there. While wandering around, he finds a man and asks him for help — only for said man to throw him a bomb. Ryouta saves himself by using his gaming skills, even as he realizes that he was just thrown into a real-life version of his favorite game.

Together with Himiko, a high-school girl, and Kiyoshi Taira, a real estate agent, Ryouta would have no choice but to try to stay alive — by hook or crook.

Btooom! is an ongoing 2009 manga by "Joker" Junya Inoue (of Cave fame), published by Shinchosa and exported to North America by Yen Press. It also has an anime adaptation directed by Yousuke Kuroda as part of the Fall 2012 Anime lineup.

The series concluded with its 26th volume in August 2018, and the English translation's final release was in April 2020.

Btooom! Online, a mobile game adaptation of the manga is currently being developed by Asobimo.

Crunchyroll is streaming the anime. US and Canada viewers may watch it here.