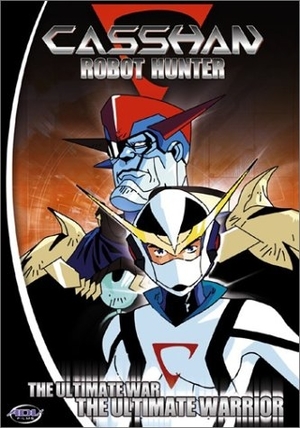 Casshan: Robot Hunter is the English title of a 4-episode OVA, a retelling of an anime series known as Neo Human Casshern.

In a World… devastated by a Robot War, humanity clings to existence, enslaved by a society of Ridiculously Human Robots backed by Mecha-Mooks, all under the command of the dreaded Black King-1, the robotic tyrant who overthrew humanity. Into this wasteland wanders a stranger, a wandering without name or past. Casshan, the title Robot Hunter — an incredibly powerful cyborg with a hatred for all Neoroids and a burning desire to slay the Black King-1.

Over the course of the four episodes, Casshan is eventually revealed to be Tetsuya Azuma, son of Dr. Kotaro Azuma, the scientist reviled by humanity for creating the Neoroids and particularly the Black King-1. Mortally injured early in the uprising, Tetsuya converted himself into a cyborg warrior so that he could destroy his father's creation.

Galvanised by chance interactions with some of the few remaining human fighters, Casshan finally confronts his archenemy in a battle neither of them can survive...