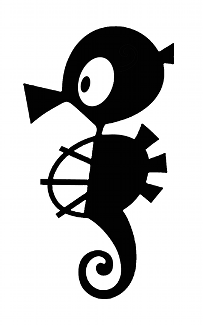 Tatsunoko Production Co., Ltd. (but generally referred to as Tatsunoko Pro.note タツノコプロ) is one of the notable and famous Japanese animation studios back during the Golden Age of Anime. Founded in October 19, 1962 by one of the animation pioneers Tatsuo Yoshida along with his brothers Kenji and Toyoharu (aka Ippei Kuri), the studio began to produce anime occupying various genres. The name Tatsunoko even has a double meaning, with tatsu no ko meaning Tatsu's Child (as in Tatsuo's child) and tatsunoko meaning sea-dragon (which is generally referred to a seahorse), hence the logo.

Over the years, Tatsunoko Pro. has produced many anime, including Yatterman and Honeybee Hutch. They generally produced a lot of stuff between 1965 and 1985, and slowed down during the late 80's and into the 90's, in which they focused more on remakes and co-worked with other studios and animated shows for other companies. The studio had a very close relationship with Fuji TV for years, with that channel/network airing many of their anime hits, notably Speed Racer and Time Bokan. Around 2005, they were bought by Takara and became a full subsidiary when Takara merged with TOMY. They have also worked on a few western cartoons, and even earned a Shout-Out in Mad Men, with the studio being contracted to make an anime version of the In-Universe comic strip "Scout's Honor."

Tatsunoko Pro. is notable for starting the career of Yoshitaka Amano, who did the character design of Science Ninja Team Gatchaman, Tekkaman the Space Knight, Neo Human Casshern (original version), Hurricane Polymar, and nearly all of the Time Bokan series. Other notables such as Mamoru Oshii and Kunihiko Yuyama (director of Pokémon) cut their teeth working on Tatsunoko shows, as did prolific screenwriter Shigeru Yanagawa, who worked in Tatsunoko's planning department during the '70s and would go on to contribute scripts to Sailor Moon and Ranma ½ to name just a few. Many of their employees have gone on to found other Japanese animation studios of today including (but not limited to) Studio Pierrot, JC Staff, Ashi Productionsnote and Actas, Kino Production, Radix, A-Line, P. A. Works, Artmic, Design Office MECHAMAN, Studio Easter and Production I.Gnote and both Bee Train and Xebec, though that extent. They are also known for making many of the dubbed anime which were thought as standard kids' cartoons back then in the US - Speed Racer, Super Dimension Fortress Macross, Samurai Pizza Cats, Gatchaman, The Littl' Bits, Superbook (the original hand-drawn series, not the CGI remake), and probably even more.

The studio is currently animating the movie

of Hutch the Honeybee. Recently they just released a Live-Action Adaptation of Yatterman helmed by cult director Takashi Miike, which like The Great Yokai War was aimed at younger audience than most of his movies and became a great success. They have also faced renewed appreciation in the west due to the appearance of Tatsunoko vs. Capcom on the Wii, first only to Japan, and then, with the Updated Re-release appearing everywhere.

with Sentai Filmworks to have eleven of their shows released in the USA.

The Canipa Effect has produced an Anime Studio Spotlight about Tatsunoko Production. Watch it here

sites for full listing of their works. A near complete list of their credits can be seen on Anime News Network