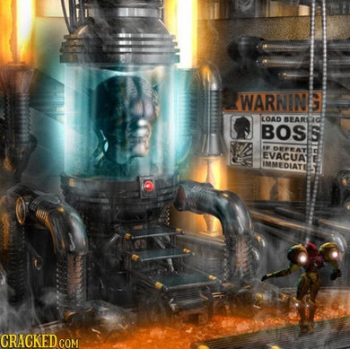 TIME BOMB SET. GET OUT FAST!
"That Witch has laid a train of magic spells so that whenever she was killed, at that same moment her whole kingdom would fall to pieces. She's the sort that wouldn't so much mind dying herself if she knew that the chap who killed her was going to be burned, or buried, or drowned five minutes later."
— Puddleglum, The Silver Chair
Advertisement:

A boss-type monster whose destruction causes the location to self-destruct (see Collapsing Lair). Usually results in a scene after the final battle wherein the player must make a hasty escape before the clock runs out.

Commonly happens with Final Bosses in RPGs and Metroidvanias.

Always seems a bit too contrived, though Terry Pratchett suggested in his first Discworld novel The Colour of Magic that this phenomenon was due to entropy (having been frightened away by the horrifying boss) making up for lost time. Or perhaps the lair simply has No Ontological Inertia.

Can be justified by some form of Dead Man's Switch or, in more fantasy/magical settings, by a literal bit of A Wizard Did It, in that the power of the Big Bad is what originally put, and is currently holding, the place together, making his defeat somewhat like shutting off an electromagnet. Double points if the base is normally impossible given regular physics, such as being so tall that it would collapse under its own weight; no boss to make up for structural weaknesses causes expected results when regular physics are allowed to do their normal thing again. Not related to Load-Bearing Hero, except inasmuch as he'll have to hold up the resulting Collapsing Lair for his friends to escape.

Particularly large-scale examples may be a type of Cosmic Keystone. A Fisher King is linked to the health of his kingdom, so logically, offing him might trigger this trope on a kingdom-wide scale. Reactor Boss is a justified subtrope. See also No Ontological Inertia. Compare Defeat Equals Explosion and Barrier Maiden. When a boss takes some final action to cause this sort of situation, its Taking You with Me.