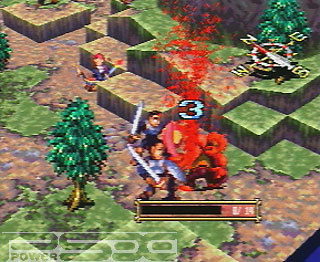 An enemy stubs his toe.
Advertisement:

Although both Vandal Hearts and its sequel involve the same Sword of Plot Advancement, the titular "Vandal Hearts", they are unconnected story wise. Flames of Judgement, meanwhile, is a direct prequel to the first game.

The original Vandal Hearts follows the story of Ash Lambert, a soldier in the Republic of Ishtaria, as the government is gradually being corrupted into an empire. It was a fairly standard tactical RPG, with its main differences from the rest of the genre coming in the form of a small amount of interactive scenery; one could kick boulders out of the way, push blocks, and so forth. Characters were restricted to a limited tree of classes based on their initial predetermined classes. Each side in battle would move all of their characters as part of their turn, then the other side would get a turn. Many missions included goals other than defeating all of the enemies, such as surviving X number of turns, reaching a certain point on the map, or destroying all enemies while preserving at least one villager.

The game was originally released for the Sega Saturn and Sony Playstation in 1997, and a decade later, plans were made at one point for a Nintendo DS re-release, but those never materialized.

Two years later, Vandal Hearts II: Heaven's Gate was released and was a huge shift in tone, both in terms of plot and gameplay. Featuring a completely different world and an entire new cast of characters, it takes place in the kingdom of Natra, which is in the middle of a Succession Crisis that threatens to explode into a full-on Civil War. Our hero, Joshua (in the manual anyway), is a young boy in a small village. One day, the village takes in a weary traveler named Nicola, who turns out to have grand plans for Natra...

Vandal Hearts II expanded on the first game by doing away with the class system (a character's class is determined by their armor and weaponry), adding learnable skills through the weaponry, allowing mission maps to be repeated, and introducing the "Dual Turn System". In the Dual Turn System, the player and the computer simultaneously give commands to one character each, and these characters would take their actions at the same time. This would sometimes require the player to second-guess the computer, as the enemy the player wanted to attack may not be standing in the same place when the attack went off. One aspect of the original that was downplayed in the second game was the variation in mission objectives; while there are a few missions in Vandal Hearts II with a goal other than "Defeat All Enemies" or "Defeat the Boss", they are far fewer in number and proportion than in the original game. Unlike the first title, this was a Playstation exclusive.

After almost 11 years of silence, Vandal Hearts: Flames of Judgment was released in January 2010 as a downloadable title on the PlayStation Network and Xbox Live Arcade. Being a Prequel to the first game, it returned to the world of Ishtaria and ditched the Dual Turn system, brought back the first game's varied mission objectives, and introduced a somewhat Elder Scrolls-like character advancement system, where characters' stats improved automatically based on their actions. The story follows a young priest named Tobias Martin as he battles a Well-Intentioned Extremist for the fate of his country.