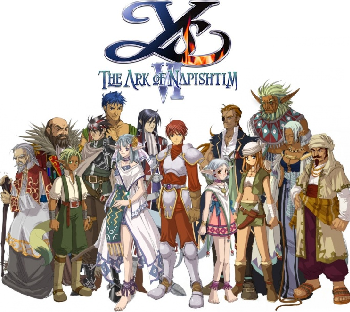 Ys VI: The Ark of Napishtim is the sixth installment in the Falcom Action RPG franchise Ys. It was released in 2003 for Microsoft Windows, then ported to the PlayStation 2 in 2005 and PlayStation Portable in 2006 by Konami, with a worldwide release available on Steam in 2015. An iOS and Android versions by Manhattan Project will be released in 2021.

Set some time after the events of Ys V: Lost Kefin, Kingdom of Sand, series protagonist Adol Christin and his traveling companion Dogi board a pirate vessel and head west of the Eresian continent towards the vast Atlas Ocean. Unfortunately, they are attacked in the middle of a maelstrom by the Romun Empire due to their pirate allies having preyed upon Romun vessels, sending Adol overboard. When he awakens, he finds himself alone in the Canaan Islands, surrounded by a giant, unceasing storm called the "Vortex of Canaan", preventing ships from entering or leaving the archipelago. With help from the native Rehda, Adol must explore these islands in search of his missing friends and find a way to stop the Vortex to escape.

Ys VI is the first title in the series where sprite-based visuals are abundantly used for characters and monsters; large bosses are presented as full 3D models, insteadnote The PlayStation 2 version uses 3D models for all. The game expands on prior installments by taking a bird-eye-view perspective from Ys: Ancient Ys Vanished ~ Omen, using different elemental swords for combat in Ys IV: Mask of the Sun and featuring jump mechanics like Ys V.

Ys VI: The Ark of Napishtim show examples of: